In picture No. 1 (without a harmonizer) one can see the aura of a man crushed, overwhelmed with something, this purple energy over his head is care, it is not the direct energy of this man. In photo 2 (immediately after finding yourself in the field of the harmonizer) you can see that the aura has grown, strengthened, and the process of purification and internal work was initiated. The Harmonizer has actively joined the aura. In the photo No. 3, (after an hour of staying in the field of the harmonizer), it is clearly visible that the aura has grown even larger and purified, calmed down and stabilized.

Test samples: Two tap water samples were tested using crystal analysis to show the energy of its internal forces. Picture A: neutral sample Picture B: sample containing information from the bio-infoo harmonizer 6 The analysis of the crystals presented here arises from the distillation and extraction of minerals from the distillation residue. These salts are combined with the distillate and applied to the slide. The liquid is evaporated at room temperature. This results in typical crystal images assigned to the samples. They allow you to assess the quality of sample viability. Production of crystallized salt: 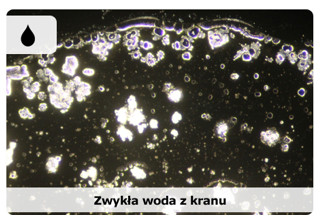 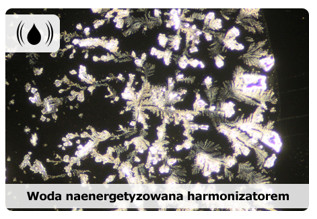 WHAT ARE THE DIFFERENCES BETWEEN WATER WITH WATER SUPPLY AND SO THE SAME WATER INCLUDED BY BIO-INFOO 6 HARMONIZER OPERATION?

These photos of normal, untreated water are just so brownish-dirty, while in the pictures of energized water you can see that they are bright and have a lot of blue in them, such a living and working energy. Here, the same picture of this water shows its physical shape, it can be seen that this water is very much changed. Looking deep there, you can see that there are seven-branched crystals with an excellent structure. Comparing photos of water according to Masaru Emoto method subjected to prayer or meditation of people in its vicinity, there vibration was stored in the crystal and it was there, while photos of water subjected to the harmonizer have another vibration, such an expansive, that is, it is a vibrating vibrating and affecting the surroundings. Harmonizers work in such a way that when a person stays in their environment for a minimum of 2-4 weeks, the man's aura learns to cope with obstacles. This is a very interesting situation, because the point is not that the harmonizer itself defends the man, but he teaches the aura of a human to cope with different radiation, with various disturbances.

And when a person stays in the surroundings of a harmonizer for the 2 to 4 weeks, even up to 2 months, his aura completely acquires the state of dealing with external energies, disturbances. It becomes so strong that it stops being influenced by the given environment in which the man resides. Even if, after this period, it comes out from under the influence of the harmonizer, this aura retains the ability to cope with obstacles for a period of about 4-6 weeks.

Therefore, after two months of being surrounded by a harmonizer, it seems that it does not work, that it does not work anymore. This is not true, only that he tuned in to the body so that the body no longer experiences external interference, because it defends itself. He became strong enough to defend himself. And this harmonizer still teaches a man and such education lasts from 6 to 12 months. So after this period, when the aura completely stabilizes and will learn under the influence of the harmonizer, to defend itself, it is already able to accept an even higher ability to deal with disturbing energies. Here is all the time talking about this energy existing in water subjected to the bio-infoo harmonizer 6. Tuning in to this harmonizer in some may last even several years. It just happens successively, because this energy of the harmonizer does not work from the way it works, only it works with people. She recognizes his abilities and cooperates, she can wait and when she tunes in, she enters a higher level. And that's why here, looking at these harmonizers, they tune in to a human being, and when this happens, the stabilized aura will cope with the outside world. But when a man begins to work internally, spiritually, they give him a very great ability and this will never disappear, it grows, increases, increases. The water energized on the harmonizer has the same effect as the harmonizers, they have the same energy. The crystals in this water have such a structure of a star, very symmetrical and very expansive, but expansive, not aggressively, expansively very calm. These crystals magnified 5000 times and maybe even more have an interesting structure, very nice, perfect, even structure, the crystals are very sharp, which indicates very strong expansiveness, very strong removal of any disturbances that are opposed to them. These sharp endings are doing very well with all adversities.

They have a different emanation from those water crystals that were filled in the human way, in the sense of human thoughts about love, peace, angels. In this water energized on the harmonizer there are no human thoughts, it is a completely different energy. Therefore, these crystals have a completely different structure, substance and are very penetrating. They do not keep this energy only in themselves, but they are constantly expansive. They are constantly connected to the spiritual source, they never lose this energy. Translation of photo descriptions: Neutral sample: In a neutral sample, all crystals show an amorphous structure. The picture has no center or structures of real crystals. At the border, small rings are visible which inform about the occurrence of dead organic material. Sample containing information of the bio-infoo 6 harmonizer: After using the harmonizer, the picture contains crystal structures, shaped in the form of twigs. This means that all information lost by the water in the aqueduct has been restored by the harmonizer.